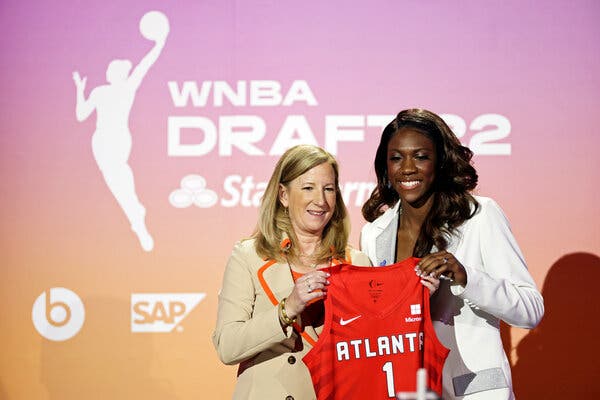 Howard, a senior guard, was the top pick after Atlanta made a deal with the Washington Mystics to move up in the draft. 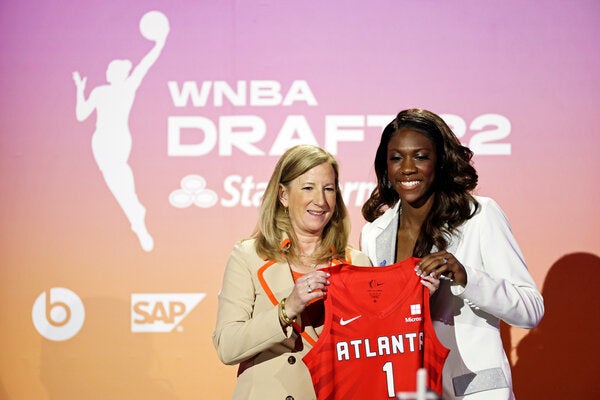 The Atlanta Dream selected Kentucky’s Rhyne Howard, right, with the No. 1 overall pick in the W.N.B.A. draft on Monday. Credit... Adam Hunger/Associated Press

The Atlanta Dream, looking for a versatile player to help rebuild their roster, selected guard Rhyne Howard from the University of Kentucky as the No. 1 pick in the W.N.B.A. draft on Monday at Spring Studios in New York.

Ahead of the draft, Dream General Manager Dan Padover said the team was looking for a player who brought “fresh energy and sparks something underneath our franchise.”

The Indiana Fever selected NaLyssa Smith, a senior forward from Baylor University, with the No. 2 overall pick. At No. 3, the Washington Mystics chose Shakira Austin, a center from the University of Mississippi.

Howard said she planned to bring to the Dream the same “competitive spirit” she had with Kentucky, where she made sure to stay “calm, cool and collected.”

“I think that’s what really helped me to become successful, and I just really want to have an impact on the team,” Howard said, adding that she will “continue to make everyone better” in Atlanta.

There is very little Howard can’t do. She is in the top 10 of almost every statistical category at Kentucky, and has scored the second-most points in program history for women and men. Last month, Howard led Kentucky to its first Southeastern Conference tournament title since 1982 when the team handed South Carolina, the 2022 national champion, its second and final loss of the season. Howard, who is from Chattanooga, Tenn., finished her senior year at Kentucky averaging 20.5 points and 7.4 rebounds per game.

Kentucky, a No. 6 seed in this year’s N.C.A.A. Division I women’s basketball tournament, lost to No. 11 Princeton in the round of 64. But Howard’s career at Kentucky has helped draw attention to the women’s basketball program at a university best known for its powerhouse men’s team.

“I’m very versatile, so whatever position I’m playing, I like to match for those positions,” Howard said. 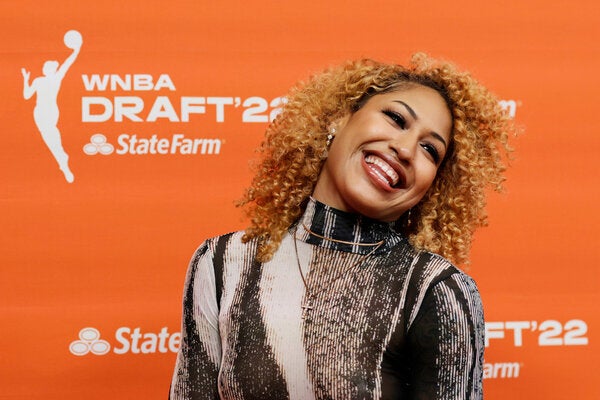 The Washington Mystics, who traded the No. 1 pick to the Atlanta Dream, used the third overall pick to select Shakira Austin, a center from the University of Mississippi. Credit... Adam Hunger/Associated Press

To be able to select her, the Dream shook up the draft last week by acquiring the No. 1 pick in a trade with the Washington Mystics. In return, the Mystics received the Dream’s No. 3 and No. 14 overall picks. The Mystics also have the right to swap first-round picks in the 2023 draft, which is expected to draw deep talent from around the country.

Atlanta finished last season 8-24, the second-worst record in the W.N.B.A., and has missed the playoffs for the past three seasons. Adding Howard to the Dream’s roster immediately bolsters their perimeter game, which should help after the team traded guard Chennedy Carter to the Los Angeles Sparks in the off-season.

Sign up for the Sports Newsletter   Get our most ambitious projects, stories and analysis delivered to your inbox every week.

“Some drafts are top-heavy; some are deep,” Padover said. “This one is probably the most deep more than anything.” He added that this year’s draft offered the best talent since 2018 or 2019.

The Liberty selected Nyara Sabally, a 6-foot-5 forward from University of Oregon, at No. 5 overall. Sabally, who is from Berlin, scored a career high 31 points in Oregon’s final game of the season, a first-round loss in the N.C.A.A. tournament. She averaged 15.4 points and 7.8 rebounds per game in the 2021-22 season.

“It’s amazing to be drafted by New York. It’s very surreal,” said Sabally, who joins the league two years after Dallas drafted her sister and college teammate, Satou. “I love that women’s basketball is growing and people recognize it, especially in such a big city like New York. I’m just happy that I get to play on a team like that.” 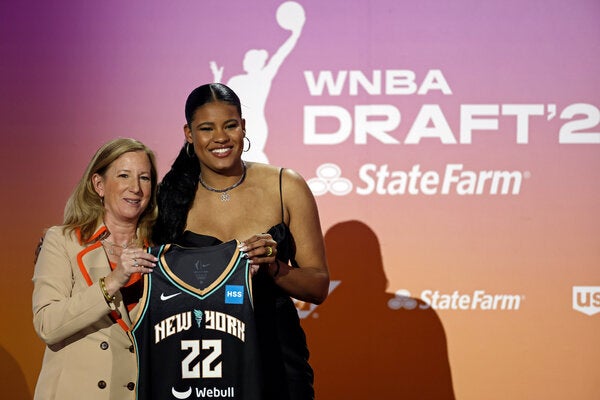 Nyara Sabally, a 6-foot-5 forward from the University of Oregon, was the first pick for the Liberty, at No. 5 overall. Credit... Adam Hunger/Associated Press 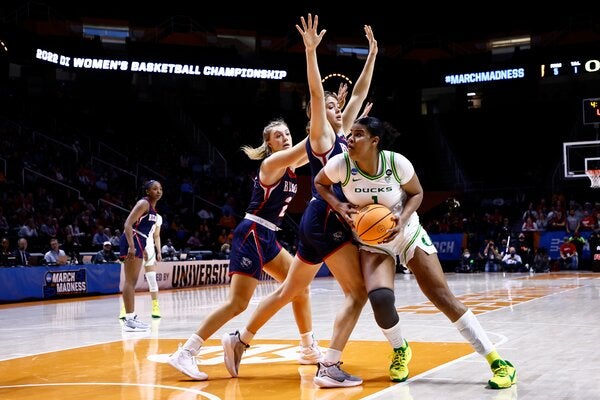 This year, 108 college players renounced their remaining N.C.A.A. eligibility to be considered for the draft, more than double than in 2021. International players and those who are no longer eligible to play in the N.C.A.A. will also be considered. But the chances of getting a spot on a roster are slim: There are 36 draft slots for the W.N.B.A.’s 12 teams, which have just 12 roster spots each. With only 144 roster spots in all, many players and fans are calling for bigger rosters and more teams, wishes the W.N.B.A. has resisted.

One reason for the increase in college-eligible draft prospects may be the pandemic. College athletes are normally eligible to play four seasons over the course of five years. After the pandemic disrupted schedules, the N.C.A.A. added a special bonus year of eligibility for any athlete who lost playing time during the 2019-20 season.

Should they not make it to the W.N.B.A. this year and still have a season of eligibility, athletes can return to their college (assuming there is still a place for them on the roster).

Julie Roe Lach, the commissioner of the Horizon League, said this year’s draft class mimics the parity seen in the 2022 N.C.A.A. women’s basketball tournament, which saw six double-digit-seeded teams make it to the round of 16. None of the three top draft picks advanced beyond the round of 16.

“You’ve got some of the names you would expect to see, but we’re seeing more schools with players that look like strong draft prospects,” she said. “That speaks to the increase of talent we’re seeing across the country of these great women basketball players.” 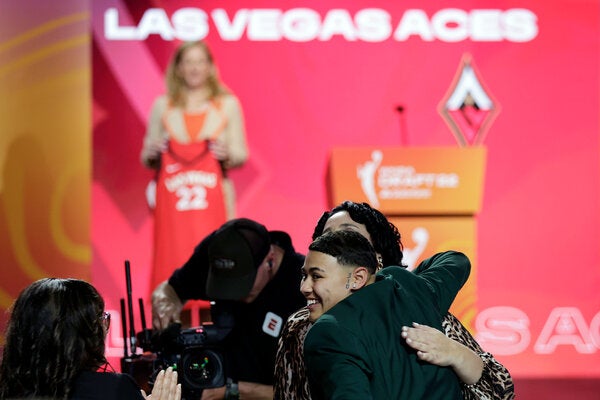 W.N.B.A. Commissioner Cathy Engelbert opened the draft by acknowledging Phoenix Mercury center Brittney Griner, who has been held in Russia since mid-February on drug charges that could carry a sentence of up to 10 years if she is convicted. “Getting her home is a top priority,” Engelbert said.

This was the first in-person draft since 2019, and players and guests did not hold back from celebrating. Colorful pantsuits, rhinestone jackets and plenty of high heels and sneakers alike filled the TriBeCa event space. The Hall of Famers Dawn Staley, the South Carolina head coach, and Lisa Leslie posed with draft prospects before the ESPN coverage began. Oregon’s Sedona Prince lived up to her TikTok fame and was capturing scenes throughout the night.

The draft capped a weekend of W.N.B.A. events across New York City, including shoot-arounds at neighborhood playgrounds and a visit to one of the city’s top sneaker shops. As the W.N.B.A. tries to increase its visibility, the league got the strongest New York City boost of all: The Empire State Building lit up Monday night in orange, the signature color of the W.N.B.A.

The 2022 season starts May 6 with eight teams in action, including the reigning champion Chicago Sky.