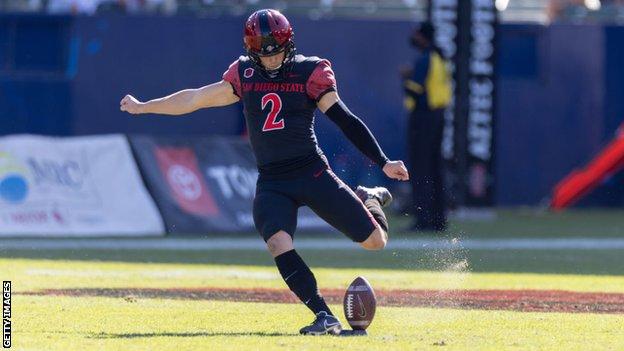 The Buffalo Bills have released punter Matt Araiza after he was accused of rape in a civil lawsuit.

The lawsuit alleged he was one of three college players involved in the rape of a 17-year-old girl last October.

"We decided that releasing Matt Araiza was the best thing to do," general manager Brandon Beane said.

Araiza, 22, has denied the allegations and released a statement saying he would "look forward to quickly setting the record straight".

"The facts of the incident are not what they are portrayed in the lawsuit or in the press," he added.

The rookie was drafted by the Bills following standout performances for San Diego State University, in which he was the country's top college punter.

It is alleged that he and two others repeatedly raped the girl at an off-campus party in San Diego.

The Bills said they were unaware of the allegations before signing him.

"Our culture in Buffalo is more important than winning football games," Bean added.

"Ultimately, we thought it was best for everybody. It's a very serious situation with the serious nature of the allegations and we just don't have the means to put all the facts together."