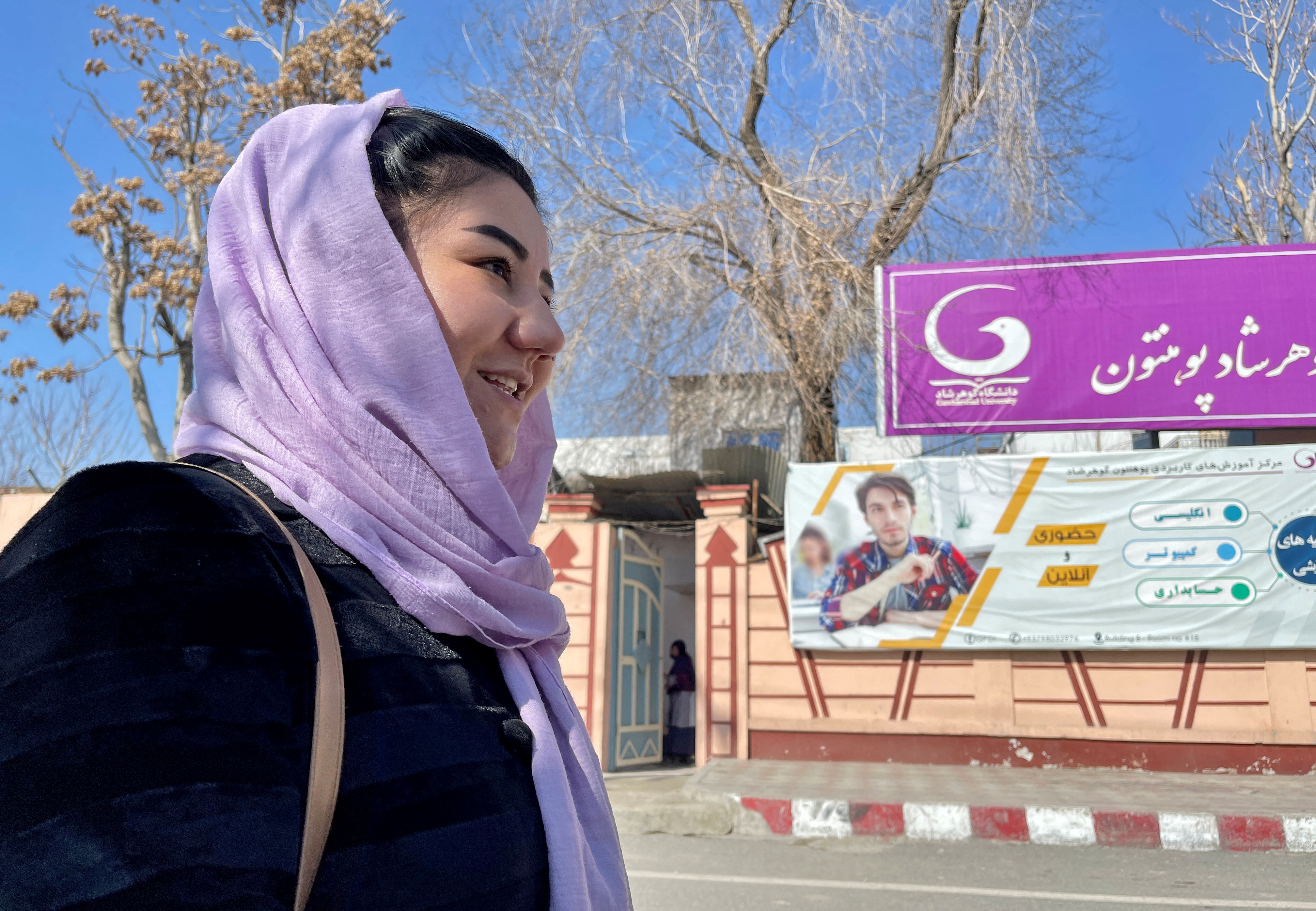 KABUL, Feb 25 (Reuters) - As students return to universities across Afghanistan this month, law major Waheeda Bayat will not be among them.

The 24-year-old was looking forward to resuming her course at the private Gawharshad University in Kabul, but amid an economic collapse that has dragged millions of Afghans into poverty, she cannot afford to go back.

"I'm so happy to see my university," she said, walking past her old campus on a recent sunny day.

Although the hardline Islamist Taliban are allowing women back into colleges - girls and women were banned from education the last time they ruled - Bayat must focus instead on providing food and shelter for her family of nine.

An abrupt halt to most aid to Afghanistan after the Taliban seized power in August has plunged the country into crisis.

Kabul parks have become shanty towns as people from rural areas seek aid; malnourished newborns fill hospital wards; up to 97 percent of Afghans could be living below the poverty line by the second half of 2022, the U.N.'s development agency has said.

The impact on women has been disproportionately large.

Data show women have lost jobs at a higher rate than men in recent months - some were thrown out of work due to Taliban restrictions in the immediate aftermath of their conquest - and some rights won over 20 years of Western-backed governments have been reversed.

Bayat used to fund her studies from her job at a local media network, where she earned 12,000 Afghanis ($132) a month.

But after she and her mother lost their jobs, Bayat manages only 8,000 Afghanis making traditional clothes with her sisters - money that must stretch to support the whole family.

"We are worried that Waheeda can't continue her studies," her mother, Marzia, told Reuters in their three-bedroom home in the west of the capital. "She is a hard-working girl. I wish I could find some money so that (she) could continue."

The Higher Education Ministry did not respond to questions about the impact of the economic crisis on women's studies and what restrictions, if any, would be imposed on female students as they returned to class.

There are no official figures to show how many Afghans - men or women - have abandoned college due to economic pressures. Among women, the rate of attrition appears to be high.

Reuters spoke to 15 female university students around the country including in Kabul, Herat in the west and Nangarhar and Laghman in the east, eight of whom said they were dropping out due to financial difficulties.

Three more said they faced challenges, forcing them to cut class times and to consider leaving.

"The humanitarian crisis is a women's rights crisis," said Heather Barr, associate women's rights director at Human Rights Watch. "Women and girls have been disproportionately affected by the economic crisis."

She said that both the Taliban's treatment of women and the international community's failure to address the economic crisis were to blame.

For some students, the relatives who once supported their education are no longer able to.

"I wanted to serve my people ... but now I cannot continue," said Mahtab, a psychology student in Herat, who gave only her first name out of concern for her family's safety.

Her older sister once funded her studies, she said, but she lost her job in the communications department of the ousted president's office.

When she was recognised by the Taliban as having taken part in women's protests after they stormed back to power, the sister decided to flee the country for fear of reprisals.

Some women planning to return to classes at public institutions, which re-open in Kabul on Saturday having resumed on Feb. 2 in other regions, worry that men and women will be segregated, subject choices limited and burqas made compulsory.

In some parts of the country, where universities have already reopened, such practices were already in place, reflecting the more conservative norms of the area.

In others, including relatively liberal centres like Kabul and Herat, there is still uncertainty over rules for women in class and on campus.

"If the Taliban force me to wear a burqa, I would rather stay home than go to university," said 20-year-old psychology student and Kabul resident Anahita.

The expansion of women's rights, particularly in urban areas, was held up as one of the main achievements of Western military and financial intervention in Afghanistan after the U.S.-led war that toppled the last Taliban government in 2001.

Until then, in addition to the education ban, almost all jobs were off limits to women and they could only leave home when accompanied by a male relative and wearing an all-enveloping burqa.

Significant investment in girls' schools and targeted measures at universities such as reserving seats for women in law and engineering, female dormitories and child care centres, saw thousands of women pursue degrees.

Female enrolment was around 24% of the total signed up at public universities in 2020, according to figures from the World Bank-funded Higher Education Development Program, roughly 21,000 women. Many more study at private institutes.

Sanctions on some senior Taliban members, alongside concerns over human rights and the lack of inclusivity in the government, have effectively cut it off from international funding and from billions of dollars of Afghan central bank reserves held abroad.

The Taliban has described Washington's plans for the $7 billion in assets frozen on U.S. soil as an "injustice" to the Afghan people.

The United Nation's development agency predicts that Afghanistan's annual per capita income could fall to $350 in 2022 from $508 in 2020.

Some data show the crisis hitting women hard. Afghan female employment levels slumped by an estimated 16% in the third quarter of 2021, according to an International Labour Organization report, compared with 6% for men.

Bleak job prospects are a concern for many female university students.

"The ministry of economy has prepared a policy that supports businesswomen," he said. "We will do our best to provide all ... they need to encourage them and support them in restarting their activities and businesses."

He added that there were women working for the Taliban government without problems.

Roma Gul, a third-year political studies student in the eastern province of Nangarhar, faces daunting odds to complete her course.

Her part-time teaching job barely covers the 3,000 Afghanis in monthly transport fees she has to pay to get between home, work and campus. It left only 1,000 Afghanis a month to for books, stationery and contributions to her family's rent.

Her job finishes at 1 p.m. each day, meaning she has to rush to campus to get to the last two hours of class, after missing the morning session. But she is still grateful university has re-opened.

"I am determined to finish school despite the problems," she said.