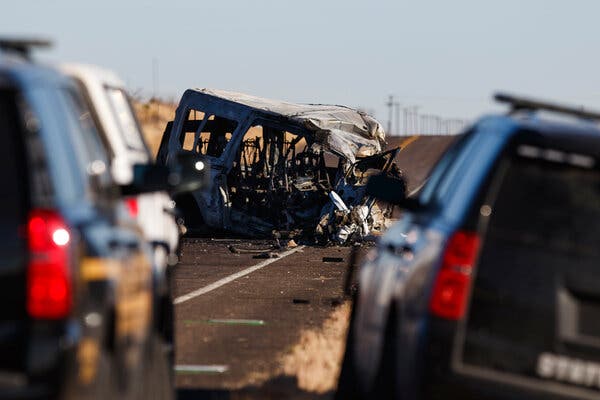 The University of the Southwest said its golf coach, Tyler James, was among the dead and that two people were in critical condition. 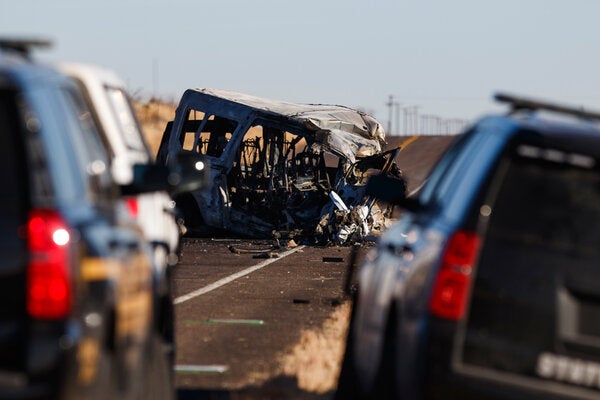 The University of the Southwest’s golf teams were making the kind of drive familiar to athletes at plenty of small colleges — aboard a passenger van around sunset and after a day of competition — on Tuesday night when a pickup rumbled into view.

The truck, the Texas authorities said Wednesday, soon struck the bus on the rural road, a tragedy that left nine people dead, including the university’s golf coach and six of his players. The wreck was among the worst accidents involving sports teams in recent years.

“This will be a huge hurdle that we will all have to overcome, and it will be a very difficult time for many,” Steve Appel, the athletic director at the nondenominational Christian university in Hobbs, N.M., said in a statement. “U.S.W. is a tight-knit family, and I am confident that we will work together to get through this.”

The university identified the victims as Coach Tyler James and the student-athletes Travis Garcia, Karisa Raines, Mauricio Sanchez, Tiago Sousa, Laci Stone and Jackson Zinn. Zinn, 22, was the oldest of the students, most of whom were freshmen at the university.

The Texas Department of Public Safety, which opened an investigation into the wreck along with the National Transportation Safety Board, said in a statement on Wednesday that the truck had veered into the lane that the team van was traversing “for unknown reasons” just after 8:15 p.m. on Tuesday. State officials said both vehicles erupted into flames, and that the driver and a passenger in the pickup also had died. The authorities did not immediately release their identities.

Two students were also in critical condition on Wednesday, officials said, after they were flown to Lubbock, Texas, by helicopter.

The golf teams had traveled to Texas, where many U.W.S. players had gone to high school, to compete in a collegiate tournament in Midland. The crash happened in nearby Andrews County, and tournament organizers said Wednesday that the remainder of the two-day, 11-school competition had been canceled.

James was new to the university, hired just last summer as coach after he had worked at other Christian universities and at a high school about 120 miles southwest of Fort Worth.

Sanchez, a freshman from Mexico, had finished in a tie for sixth place at a tournament last autumn. Garcia, a 19-year-old freshman who had gone to high school in a small city south of San Antonio, wanted to join the United States Secret Service or, like Bubba Watson, his favorite athlete, become a professional golfer. Zinn, who was from suburban Denver and admired Phil Mickelson, was studying hospital management and loved cheeseburgers. Sousa, 18, had come to the United States from Portugal, the university said.

Raines, a biology major from Fort Stockton, Texas, would pray and listen to music before her rounds and planned to become a forensic scientist. She was a fan of Nelly Korda, the American golfer who won a gold medal at the Tokyo Games, and the Los Angeles Dodgers baseball team. Stone regularly recited the Lord’s Prayer before she teed off, studied global business management and liked to juggle.

Her favorite sports memory, according to her profile on a university website, was “all the bus rides.”

The U.S.W. sports program, which is a part of the National Association of Intercollegiate Athletics, is a part of the undergraduate experience for many of its hundreds of students, according to federal records. It is like many small athletic programs that exist more as providers of extracurricular activities than as financial engines; between July 2019 and June 2020, the athletic department recorded revenues of about $3.8 million, less than the base salaries for many of the country’s most famous college football coaches.

The university, though, is not the first small school to face horror involving one of its traveling teams. In 2007, members of Bluffton University’s baseball team were asleep when their bus plunged from a highway overpass in Atlanta; five players, as well as the bus driver and his wife, died. Seven years later, four North Central Texas College softball players died in a wreck on Interstate 35.

In 2018, 16 people died in Canada after a bus carrying a junior hockey team from Humboldt, Saskatchewan, collided with a tractor-trailer near the intersection of two highways.